Laboria Cuboniks will outline some methodological propositions following the demands mapped out in her Manifesto (released in 2015). Answering to the rhetorical question posed by Gilles Châtelet “Can one extract a part from the whole without leaving scars?”, Cuboniks takes up what could be called the ‘geometrical ommission’ from much of post-structuralisms’ derivative disciplines that limit the potential of particularisms (points) by assuming one can properly identify them in isolation, divorced from their field conditions. Following the integrative approach endemic to a synthetic procedure, she will argue for the necessity of an epistemic gluing operation to adequately describe the types of complex, contemporary objects that define our time (extra-local/temporal objects), requiring new cognitive approaches in order to afford suitable modes for their episto-politicization.

Why a Rationalist Art?

The malaise of contemporary art is by now commonly acknowledged. Beyond the diagnostics of art’s recent and still prevalent conditions, counterproposals are needed for what art might do and, consequently, what it has to be. The recent vindication of rationalism offers one particularly compelling countermanding of contemporary art. It is particularly significant if the concern is to establish criteria for art that are binding yet expansive, obtaining societal traction by extending art beyond the internal concerns of the artworld. Yet, as this presentation will propose, philosophically organised deontologies can not provide the criteria needed for art. As an institutionally-constructed praxis, art is constituted by a risk rationality that abrogates conceptually organised commitments. The question that arises is then: what kind of rationality should art operationalise?

This conversation will stem from the writers’ common interest for the realist description of the world, the notion of literary genre, and the concept of science fiction, as well as the situation of these ideas in regard to the modern novel, to explore their traction on world construction, possibility and futurity.

The Sprawl (Propaganda About Propaganda)

The Sprawl (Propaganda About Propaganda) challenges the Internet as a weapon of mass disruption. A cinematic adventure that spans documentary, art film production, and music video, it conceives of and visualises the idea of worldwide social media as an emergent architecture for political activism and propaganda.

Two unknown men speak on the phone. They discuss their involvements in military operations in eastern Ukraine, accompanied by images of a chaotic stroll through a nightly, Russian forest. A plane passes through the moonlit night sky, and a voice recites a poem by Anna Akhmatova, while a woman, in near darkness, looks at herself in the black mirror of her computer screen. Then, she looks at us. Enter the strange and deceptive world of The Sprawl, a strikingly poetic film on propaganda in the internet age.

Metahaven’s feature debut film is a documentary and a music video. Silent sword fighters stare at us. Silent actors look at us. They gaze at their screens, and at the deepest corners of YouTube. Strange and colorful interfaces overlay their appearance until medium and message become one. Together with cinematographer Remko Schnorr and electronic musician Kuedo, Metahaven in The Sprawl create a new visual world for the internet’s geopolitical agitprop.

To be human is to enter into a game of ends and means. This game is not a natural game. Animals do not play it. It is the game through which humans construct themselves as well as their environment. It is a normative game whose rules can be altered and transformed, crossing over the whole range of human engagements with the world.

Elaborating on the contents of the first issue of Glass Bead’s journal, this launch event is dedicated to the following questions: what is the function of art in this game? How can theoretical and practical forms of expression help to reshape the rules of the game and further transform our normative landscape?

Contemporary art generally opposes this game of normative gestures with an endless play of indeterminate signification. It puts forward an understanding of creativity and freedom as that which can only be achieved by escaping the game and its all encompassing logic. Doing so, it paradoxically projects normativity into the background, as an implicit condition with which it becomes impossible to engage.

Contrary to this position, Glass Bead contends that any escape from the game already supposes a type of engagement with its fabric. There is no seclusion, no retreat, no outside to the game. Freedom is not the indeterminacy of play: playing the game means committing to an ongoing process of construction and revision that continually changes its nature. Such a claim does not mean that normativity is freedom, but that freedom pertains to the normative game of ends and means. It is through the congruence and divergence of ends and means that norms can be made explicit, revised and transformed.

The event at Les Laboratoires d’Aubervilliers proposes an investigation into this redefinition of the game and art’s role within it. This exploration will articulate the two dimensions of any game: its depth and its plies. The depth of play names the ability to foresee future moves and adapt the play accordingly. The ply, describes a turn of the game between two players. To take part in the game implies the strategic correlation of these two dimensions where any local engagement within it (the ply) is a transformative commitment with its global structure (the depth).

In such a conception, making a move in the normative landscape of the game is necessarily bound to an act of self-transformation. It does not leave us intact as players by preserving what we are but involves us in a constant redefinition of what we can be and ought to be. These events are dedicated to the collective formalization of this uprooting. 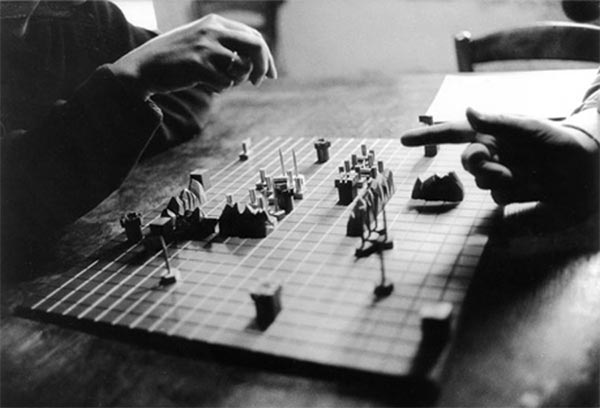