The following sequence of texts and images continues our research on censorship, language and non-normative forms of sexuality that led to the publication of Whispering Catastrophe. On the Language of Men Loving Men in Japan (Self Pleasure Publishing in collaboration with OuUnPo, 2018). Whispering Catastrophe originates from an encounter with the erotic pictures of underground photographer Kurō Haga in Tokyo, on a warm summer night of 2013. It was our very last night in the city and we were strolling around Shinjuku Ni-Chōme, the main gay district of Tokyo, which would have become the place of many more encounters and conversations. In one of the sex shops of the area we found a vintage homoerotic magazine dating to 1978. As hearsay goes, this rare and semi-unknown photo-story is presumably a spin-off of Haga’s picture magazine BON. A love story between two boys is told through a deconstructed game of seduction between landscape and bodyscape. Sometimes the lovers’ bodies are silhouettes suspended over the sea. Other times, the ocean is overlaid on their naked bodies as a postcard that veils their sex.

Visual censorship is a constant presence in Japanese public images of naked bodies, even in hardcore pornographic materials. Any visual representation of sex organs, and especially the male ones, is scratched away, fogged, or masked through the techniques of bokashi and masaku gake. The magazine we found that night however, performs a different kind of omission pushing the aesthetics of the censored male body into a more experimental dimension. The obstructions imposed by censorship flee their pre-defined coercive function and become triggers of sensual desire. Kurō Haga’s erotic photography, which was mainly published in BON between the 1970s and the 1980s, complicates the relationship between the seen and the unseen. Through a technique that we may refer to as “erotic collage,” Haga turns the markers of censorship into an artistic process of image manipulation, superposition, and interpolation. The hierarchy between background and foreground, as well as between space and the body, is often overturned. Architectural and environmental elements are either placed in front of or on bodies to hide, and simultaneously to evoke, the forbidden object of desire. This intercalation of bodies and spatial features open to an architectural semiotics of the homoerotic body. The overlaid images or objects become a sort of ersatz of the missing organ, reminding us that desire often arises from the lack.

In the following contribution to Glass Bead’s research platform we transliterated into words a selection of photos from different BON issues. Complicating further the relationship between desire and visibility that is already at play in Haga’s work, these descriptions visualize the images while negating a visual fruition. Composing an impossible collage, these “body texts” are set in dialogue with black and white images of Shinjuku Ni-Chōme that we realized during one of our research trips. The photographic series Shinjuku Ni-Chōme (2018) shows a daytime view on the many bars that, spread on multiple levels, define the urban quality of the neighborhood. While their doors are shut, their names linger as an invitation. The impossibility to enter is accompanied by an evocation, an opening gesture for the wandering mind. The shut doors became for us a strong visual metaphor of our presence as foreign bodies in the area, materialising the several layers of censorship, translation and impediment that characterized our research experience. As a reflection on questions of consumption, exoticism and access, this sequence deepens the complexities of our research on censorship and eroticism. It is an invitation to meander (the slips) between the seen and the unwritten, and alternatively, between the unseen and the written. 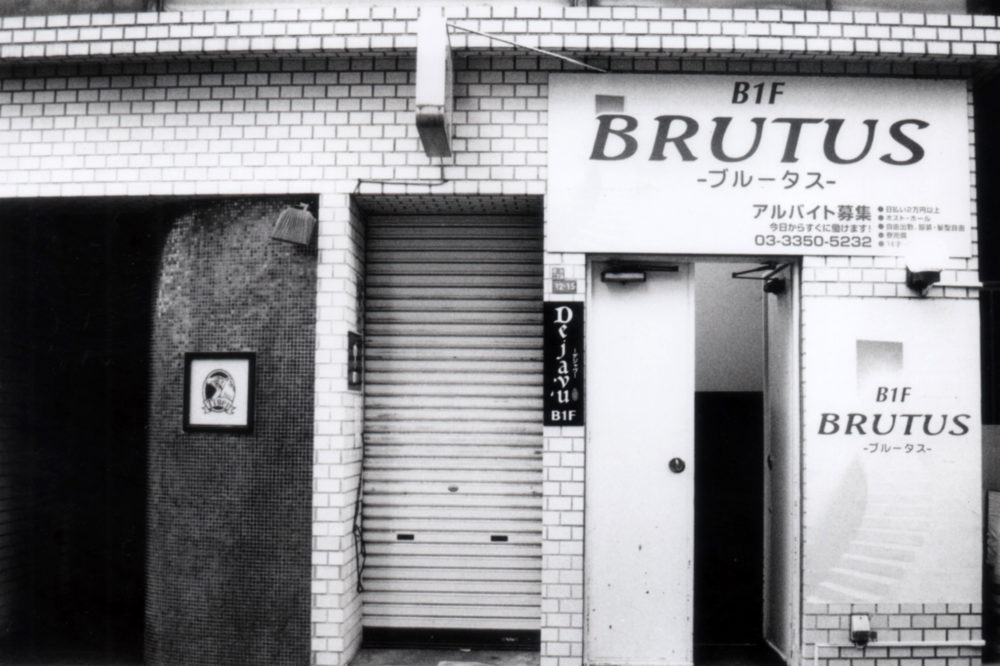 His body was one of the many objects scattered in the room.  He came back after work. His shirt and trousers were laid out on a dirty carpet. He had taken them off in a rush. There was an ugly little table in the middle of the room. All around many other objects spread without any order: a lamp, a leather chair, and a few canvases taken down from the wall. A big round mirror was in the centre of the space, also on the floor. Three flamboyant glasses stood on top of a plinth. On the opposite side, on a desk there was an electronic apparatus, maybe a big radio system. He was sitting on the floor, in all the mess. The upper part of the body bent backwards. The face of another man covered his groin and all his body stretched with pleasure, giving shape to a perfect curve. 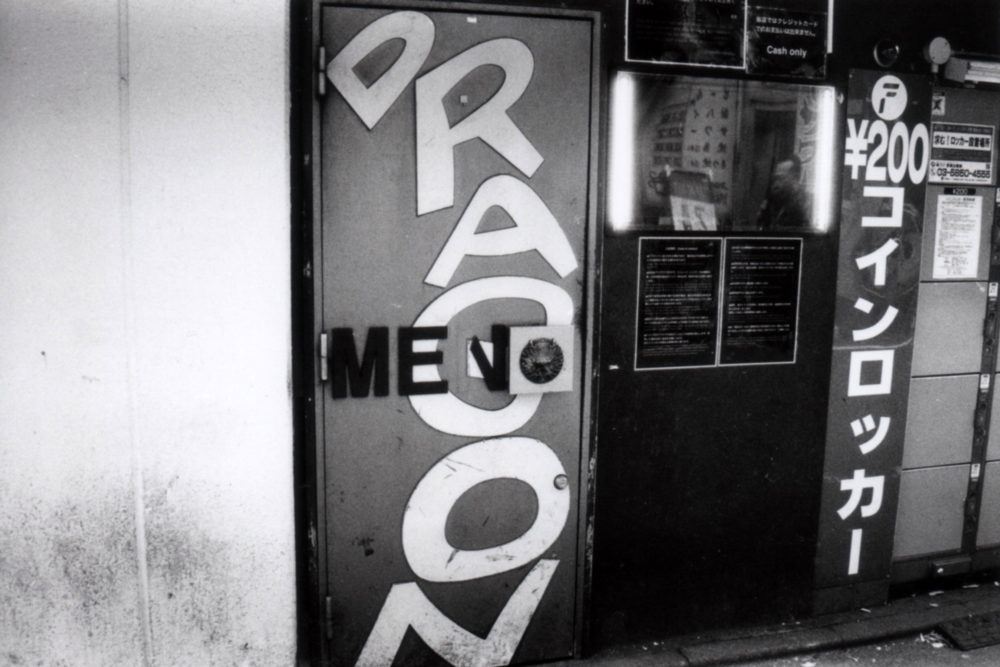 It was a building from the 1960s. Not very tall. Outside it was grey, pale concrete grey and very rugged. The sun rose inflexible. Close to the top, some curved metal poles were stuck in the surface. They functioned like a rough ladder leading to the rooftop. The window was close to them, just a big square hole in the concrete. Inside the window, the boy was lying on a white bed with his strong cock immersed in white underwear. The man was behind the boy’s body, dragging him to the wall. On the wall a stuffed creature, half elephant half dog, was hanging like a ghost. Two cartoonish eyes witnessed everything. Next to the ghost a Chinese calendar. The image of the month was a watercolour of a forest. The treetops were all deliciously sagging downwards. 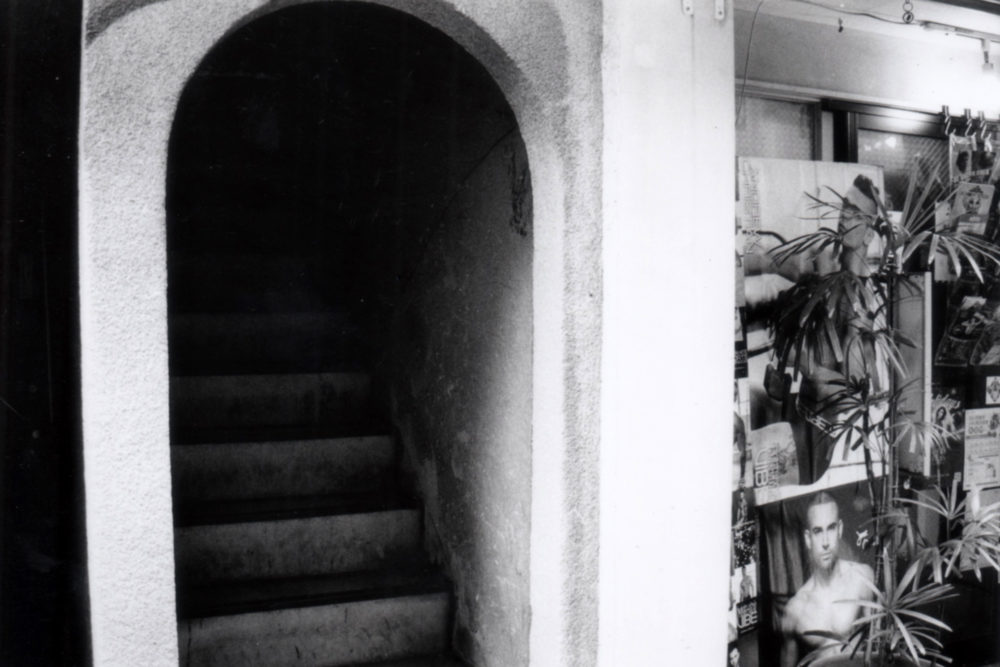 The bathroom was quite big in comparison to the rest of the house. Quite a glossy, dark green rasin covered the floor. It always looked wet. Irregular black tiles composed the wall, like flat rocks encrusted on the surface. Within this darkness, the white ceramic of the bathtub emanated a shining light. Part of the boy’s body was immersed in water, his face turned on one side. The white ceramic lit up his skin, while the hair of his legs, half out the bathtub, were wet, looking darker and thicker. One arm was completely lost underwater. The other hand was holding his soft crotch. The blood was slowing but impetuously getting there, like a big cruise that crosses the waves of the sea. 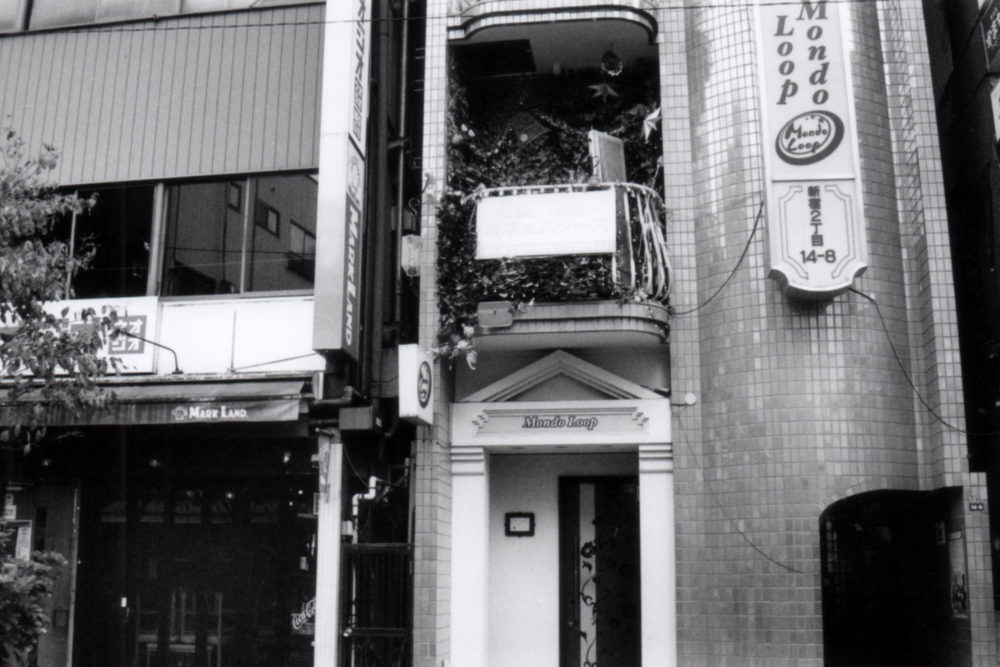 On a dark wooden cabinet, a man is crouching. His expression is defiant, concealing something. His lips are amused and amusing. I wonder if he jumped onto that cabinet. The cabinet, which I can’t fully see, is set against a wall covered in silk wallpaper. Very bon ton. A vaguely impressionist painting of trees adds another touch of bourgeoisie. The trees have lost their leaves. Below the painting a porcelain doll under a glass theca. She is framed, like the tree. She is bowing. Her head slightly turned downwards. Her expression is reassuring. Her lips pronounce a zealous smile. Next to the bowing lady, the crouching man. They both look at me but he is looking obliquely, as if engaged in a silent conversation. There must be someone else in the room. She is wearing clothes. He is not, but a white transparent drape veils his sex. The drape has dots and a vague after-taste of bourgeoisie. He is alive and unframed. 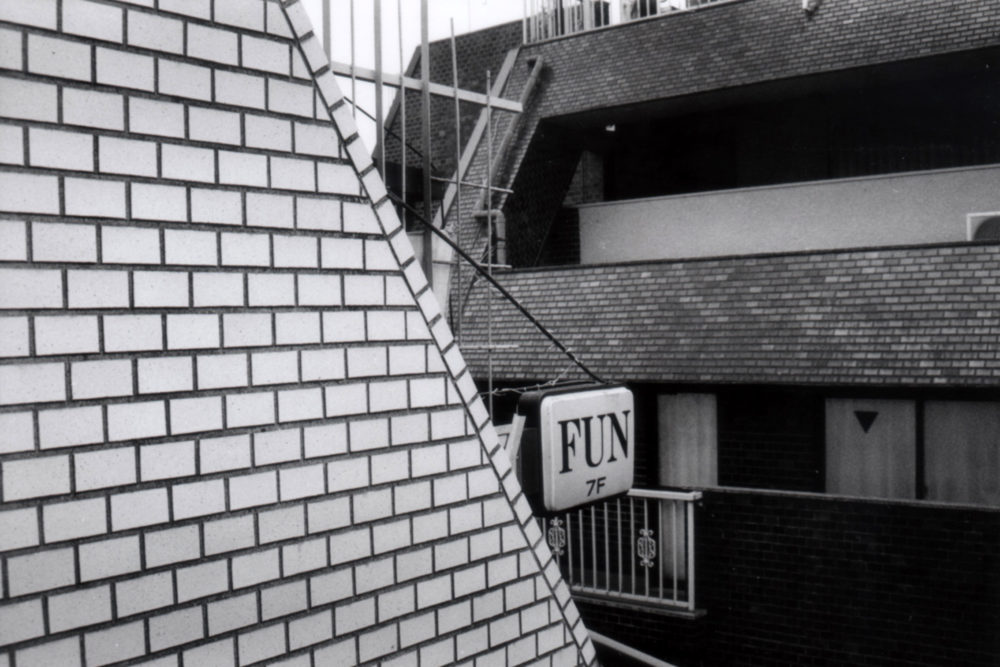 It was a very cheap garage. Rented by the hour. The bricks are cheap. Brown. Nothing particular about them. Just bricks. Just a background. This Saint Sebastian is cornered. The architecture of the body quite robust. The body is tied up. It has been tied up for several hours. The flesh shows the marks of beating. Whipping to be specific. The left arm is hurt. It needed bandage. The bite was too deep. Above his heart a wound is open. A bleeding stigmata. An open fissure into the body. Saint Sebastian is screaming his pain. His head reclined, looking up. Actually looking nowhere as his eyes are squeezed in the scream. His body hair is unusually abundant. The rope around his wrists holds his arms up, designing a figure of vulnerability. The rope holds his member too. It holds it tight, as it almost explodes in the shadow of cheap flowers. White fake cheap flowers. 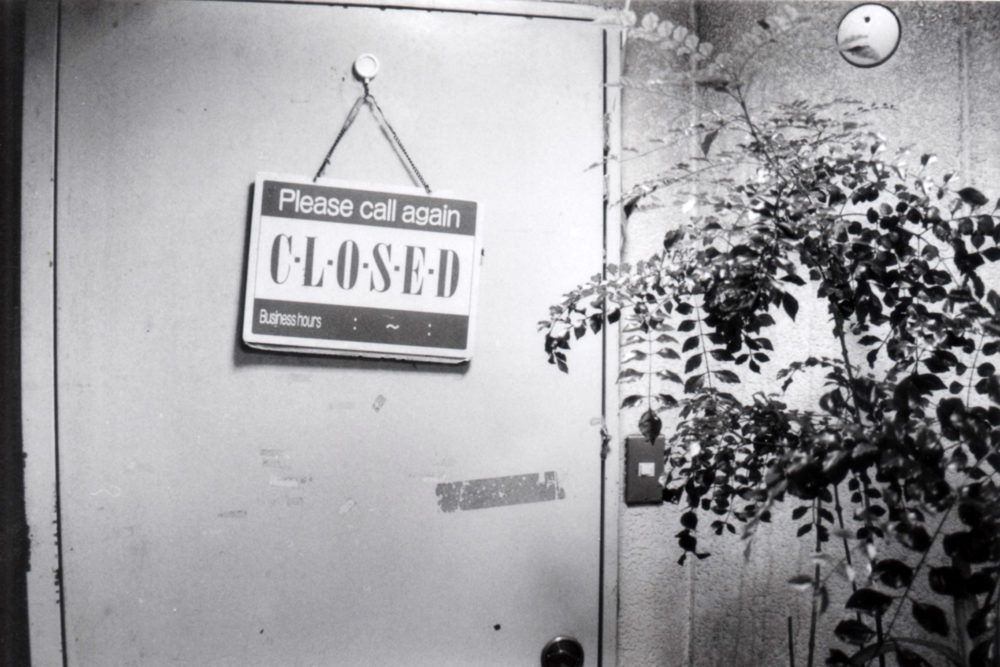 Melancholic, day-dreaming, sensing the roughness of the carpet with delicate young skin. An angelic body is reflective and longing. A choreography of romantic gestures of loneliness are set against the geometric patterns of the separation walls. The movable panels form a grid, an abstract territory where to loose one’s self and where to look for distant desires. The lost lust… the lost love… a sigh of fantasy makes this body elusive and aroused. A purple foulard caresses the angel’s lonely pleasure. I wish this silent moment could take us away, far away.